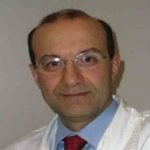 Emanuele Cozzi is a clinical immunologist with extensive clinical and preclinical expertise in the field of allo- and xeno-transplantation. Prof. Cozzi played a pivotal role in the development of the first transgenic hog (hCD55) of IMUTRAN (a British biotechnology company, Novartis subsidiary) and established preclinical evidence for the usefulness of genetic modification of complement proteins in the survival of pig xenograft in primates.

Prof Cozzi is a scientific advisor for Xenothera and he brings to our company its worldwide expertise on xenotherapy topics.